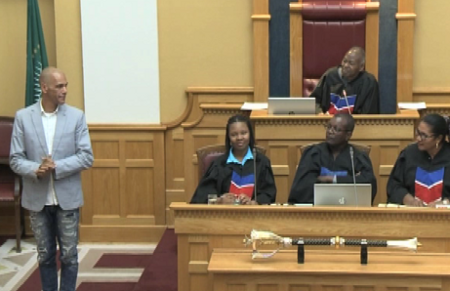 Windhoek (Namibia) and Frankfurt (Germany), November 2018. In a historic moment for Namibia and the young start-up, PEBL founder and CEO Vincent Van Wyk, was invited to the Namibian National Assembly (NA) floor. Van Wyk is the first non-parliamentarian to be invited to the Parliament Chamber floor in the history of Namibia. He was lauded for creating the first-ever Namibian developed and assembled computer by all honorable members of Parliament (MP’s). He was directly addressed by the Prime Minister (PM), the Speaker of Parliament, the Minister of Information, Communication, and Technology and other honorable MP’s.

24 hours before this historic event, Van Wyk was invited through the unwavering efforts of Deputy Minister of Public Enterprises and MP, honorable Veikko Nekundi, to speak before the NA’s Standing Committee for ICT and Innovation. Van Wyk’s presentation was electrifying, which lead to the committee chairperson nominating MP hon. Pendukeni Ivula-Ithana to present PEBL to the NA in Parliament Chambers and inviting Van Wyk to the VIP section of the Parliamentary Chambers during the Parliamentary session. The Hon. Pendukeni Ivula-Ithana presented PEBL to the MPs stirring emotions within all MPs present. Mid-way through her presentation, in a magnificent turn of events, members of Parliament proposed Van Wyk to be brought down to the Chamber floor. In a historic consensus decision by the MPs, Van Wyk was brought to the floor and he and PEBL were received with great enthusiasm by the National Assembly, which expressed a committed interest in the project.

Previously, Namibian government procurement policies were price-driven, but the government has adopted an approach of prioritizing “Made in Namibia” and supporting Namibian production. Government policies are already in place that prioritizes buying local and supporting Namibian manufacturers and innovation. The hon PM Saara Kuungongelwa-Amadhila urged MP’s to implement these policies to support PEBL. Further, the PM instructed the government’s IT divisions to order PEBLs to create a proof of concept, investigating government applications’ computing needs and specifications. In calling for more government support for innovation, Namibia’s Minister of Higher Education, Training and Innovation, hon. Dr. Itah Kandjii-Murangi, said “We must identify these young people and create opportunities to propel them. We need to find ways to make sure innovation takes center stage in our education system.”

These historic set of events represents a significant step in PEBL’s profile in Namibia and on the continent. PEBL has recently launched its online store and is taking orders nationally and internationally as well as surpassed revenues of more than one million NAD. The company is actively expanding its production capacity to meet demand, as well as preparing to open a facility to move full production of the PEBL to Namibia. In Africa’s rapidly expanding entrepreneurial space, PEBL fills an unmet need as the vast majority of African start-ups are producing software solutions. Van Wyk said, “PEBL aims to become synonymous with the new African culture; rising up with them as a household brand, which delivers access to information through provision of the creative PEBL products that meet their unique needs.”

Frankfurt (Germany) and Nairobi (Kenya), February 2021. GreenTec Capital is very pleased to report that Ecodudu will begin construction on an 8-acre rearing facility that will allow the innovative Kenyan waste-to-value company to significantly increase production of their fertilizer and feed products. The new facility will be located approximately 75 kilometers outside of Nairobi on…

Frankfurt and Berlin (Germany), February 2021. GreenTec Capital is very pleased to report that Boreal Light GmbH has begun their expansion beyond the African continent with projects initiated in Indonesia and the Philippines. Earlier this month, five container-based water desalination units were loaded onto a cargo ship headed for Manilla. The company’s Asian expansion follows…

AgroCenta Raises US$ 790K in working capital and development funding

Frankfurt (Germany) and Accra (Ghana), February 2021. GreenTec Capital is very pleased to report that AgroCenta has successfully raised US$ 790,000 in funding. The funding will be used to scale the Agri-Tech ecosystem in Ghana and for working capital to secure crop purchases from small-holder farmers. The funding was raised from a consortium of development actors…