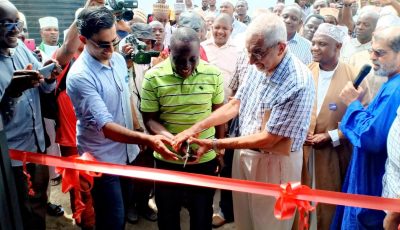 Miamba, Kenya, December 2018. Boreal Light GmbH has just announced the launch of one of its most unique implementations of the Winture Planet Cube Water Desalination Systems ® in Miamba, Kenya. The project was co-financed by Boreal Light and Miamba community. The system can produce more than 10,000 liters of hygienic desalinated water per day, which the Miamba community will use for irrigation and drinking water.

Miamba, is located in central Kwale county, in southeast Kenya. The region is semi-arid with about 80% of the local population practicing subsistence farming. Prior to the WaterKiosk’s ® launch in Miamba, local residents had to travel more than 10km, often on foot, to collect low-quality borehole water. The new WaterKiosk’s ® will provide Miamba village with low-cost drinking water locally and the drip-irrigation season will substantially increase the community’s agricultural production capacity, whereas before agriculture was only possible on a limited seasonal basis. The Kwale region, like many others across Africa and the world, has been experiencing lower precipitation rates due to climate change.

The Miamba WaterKiosk ® was inaugurated with a ribbon-cutting ceremony where Boreal Light co-founder and CEO, Hamed Beheshti cut the ribbon with the head of the Bilal Mission of Kenya, Mr. Abbas Nasser, as well as, a representative of Kwale County Government. Mr. Beheshti hopes that the collaboratively financed project will become a model for local involvement in expanding access to clean water and financial inclusion. The WaterKiosk ® will provide community members with clean drinking water as well as provide water to a drip-irrigation system on 1 hectare of land, designated to produce local organic crops. The project also installed a locally manufactured solar crop dryer, which will help local farmers prevent crop spoilage and store their grain, improving market opportunities. Finally, using another of Boreal’s innovations, the high salinity wastewater will be used for dishwashing and toilet water. The waste water’s high salinity provides anti-microbial properties which facilitate waste treatment. The WaterKiosk ® and expanded agricultural production capacity and storage will help increase local revenues, as well as, provide jobs to the kiosk operators.

This is just one of many possible configurations with Boreal Light’s Plante Cube ®, which is designed to provide desalinated water to harsh and remote regions. Boreal is currently scaling its network of WaterKiosks in Kenya as well as seeking local partners for expansion into neighboring countries such as Uganda. The Miamba WaterKiosk amply demonstrates the potential of GreenTec’s investment focus on digitalization, agriculture, and renewable resources.