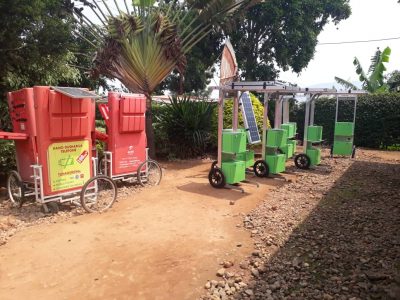 Kigali (Rwanda) and Frankfurt (Germany), January 2019. GreenTec Capital is very pleased to report that ARED is starting 2019 with a strong push to expand connectivity options in Africa. The company has completed the assembly of an order of 20 additional Mobile Shiriki Hubs as well as launched a new product offering to help digitalize existing brick-and-mortar businesses. The expansion of ARED’s product line is complemented by the initiation of partnership talks with additional marketing and service partners as well as plans to enter new African markets in early 2019.

ARED has recently completed the assembly of an order of 20 kiosks designed and produced by Tec-Solute GmbH in Karlsruhe, Germany. The newly assembled kiosks will be deployed to supplement the company’s operations in Uganda and Rwanda and expand the footprint of its mobile network offerings in both countries. The kiosks are the first installment of a planned deployment of 80 kiosks that are funded from a successful crowdfunding campaign with Bettervest. ARED raised €250,000 through Bettervest’s platform in 88 days from some 427 contributors with investments ranging from €50 to several thousand Euros. The result of this successful campaign will create 80 new jobs in Africa and help provide low-cost internet access to Rwanda’s “on-the-go” mobile device users. The company is actively exploring the relationship with new manufacturers to bring down kiosk production costs, with plans to deploy the remaining kiosks through the first half of 2019.

In addition to its new product offering, the company is in the midst of several important partnership negotiations. The first of these is with iRembo, a Rwanadan government initiative to digitalize its Government services. The partnership will integrate ARED’s connectivity services with existing iRembo agents, providing them with low-cost connectivity services and enabling iRembo agents to sell internet access through ARED’s network. The on-going discussions are also focusing on the possibility of providing iRembo services through ARED’s kiosks and digitally-enabled businesses. The company has also developed a partnership with MTN Rwanda to provide data to ARED’s network, bringing costs down further for the company’s end users. As a part of this partnership, ARED was able to provide WiFi access points to the prestigious MTN Rwanda Open Golf Tournament, in November 2018. The companies are also in talks to provide MTN marketing content through the ARED network. Finally, ARED plans to expand into West Africa and is in talks with local partners in Cote D’Ivoire. The company plans to initiate a pilot in the country in early 2019.

With its on-going kiosk rollout, new products, and active partnership discussions, ARED is poised to make big moves in 2019. Many thanks to all of ARED’s supporters of the Bettervest campaign, and we look forward to reporting on many more successes in the near future.