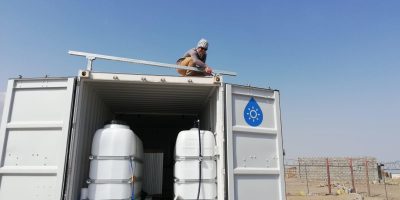 Nairobi (Kenya), Khor Umaira (Yemen), and Frankfurt (Germany), May 2019. GreenTec is very pleased to report on Boreal Light’s continued expansion and growth in delivering impactful water desalination solutions. Recently, Boreal has completed the installation of a water desalination system to Yemen as well as the furthering growth of its WaterKiosk Project in Africa.

The Boreal team has recently completed the installation of a custom solar and wind-powered water desalination system to Khor Umaira village, which lies approximately 80 km west of Aden. The system funded by Oxfam is capable of delivering 20,000 liters daily of hygienic desalinated drinking water for the village. Boreal expects to deliver several more systems to the region throughout 2019.

In Africa, Boreal is building momentum with its impactful WaterKiosk project. The company has recently implemented a public-private partnership with the Wajir Water & Sewage Company, in Wajir Kenya. The partnership is further supported by World Vision, the Millennium Water Alliance and its Kenya RAPID program. The project will see local partners ensuring security and sales, while Boreal provides technical support and backup, all while brining affordable drinking water to the local population. Boreal plans to continue scaling its WaterKiosks in Kenya and has recently visited Ghana to explore expansion possibilities into West Africa.

Frankfurt (Germany), June 2020. GreenTec Capital is very proud to report that Ecodudu and Coliba were both included among the finalists of the Clim@2020 Pitch Competition, organized by the Green for Growth Fund (GGG). Clim@ and the GGG are advised by Finance in Motion. Due to the COVID situation the competition was held remotely with…

Frankfurt (Germany) and Abidjan (Cote D’Ivoire), March 2020.  GreenTec is very pleased to announce our investment in Coliba, an innovative Cote D’Ivoire-based recycling and waste management start-up that is addressing one of the most prominent ecological problems of our time: plastic waste. Over 5 million tonnes of waste are generated each year in Côte d’Ivoire…

Frankfurt (Germany) and Nairobi (Kenya), March 2020. GreenTec Capital is very pleased to report that Boreal Light have announced the launch of the largest decentralized solar water desalination project in Eastern Africa in partnership with WaterKiosk LTD,  Atmosfair GmbH and the Bilal Sustainable Development Project. The project’s genesis can be traced to an industry event…