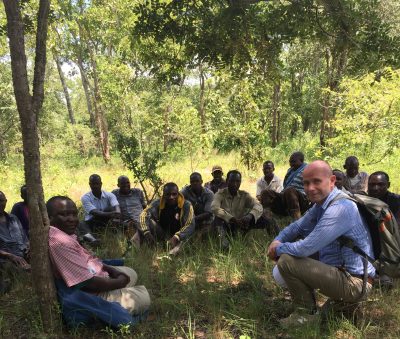 Dar Es Salaam (Tanzania), and Frankfurt (Germany), May 2019. Earlier this year, Nils Hafa, GreenTec’s Head of Company Building traveled to Tanzania to meet AfriLife founder, Atanas Mluki in Tanzania, as well as, meeting and engaging several stakeholders in the Tanzanian start-up ecosystem on behalf of the GreenTec Capital Africa Foundation.

Nils’ trip began with a fact-finding mission into Tanzania’s start-up scene as a part of the GreenTec Capital Africa Foundation’s mission to map and support the African start-up ecosystem. Nils was able to meet with several start-ups and ecosystem stakeholders, such as Sahara Ventures and Seedstars’ Seedspace, as well as, learning about several local start-ups including Smartcore, Worknase, Konga Agribusiness LTD, and Riom. Nils said, “I was really impressed by how tightly integrated the Tanzanian ecosystem was. As with many start-up players in Africa, funding is a persistent and sustainability remains an issue, but the ecosystem here seems very supportive and proactive. I was particularly impressed with how the local players support themselves with consulting in addition to their primary businesses.”

The trip also provided the opportunity to meet with Atanas Mluki and the AfriLife team. AfriLife is an impactful Kahama-based honey producer that works with more than 80 beekeepers working around the Kigosi Game Reserve. AfriLife has recently invested in improving its processing facilities that have increased the company’s production capacity, as well as, diversifying the company’s products to include infused honeys and beeswax products. The company is in the process of establishing a beekeeping training school and is developing a program to expand women’s opportunities in beekeeping. Currently, beekeeping is seen as a man’s profession because of the risk and manual effort involved in traditional African beekeeping, which utilizes labor intensive hollowed log-hives that are suspended high in the tree canopy. AfriLife plans to promote modern top-bar hives, which can be placed at ground level, as a way of expanding opportunities for both youth and women in apiculture, in addition to promoting the use of non-stinging bees. During the visit, Nils and the AfriLife team had a call with representative of Jasminjn Bee. Jasminijn Bee is a Netherlands-based honey importer with operations in Dar Es Salam. The call was productive, and the two companies identified several areas of potential cooperation and collaboration to explore further.

The visit was very productive for the GreenTec Capital Africa Foundation, as well as, GreenTec’s work with AfriLife as Nils was able to meet the whole team, as well as, some of the beekeepers to better understand the business. We are happy to see the company attract potential international partners and are eager to learn more about AfriLife’s development of beekeeping opportunities for women.

Frankfurt (Germany) and Lagos (Nigeria), December 2021. GreenTec Capital is very pleased to report that Pricepally was selected to receive funding and support from US-based SOSV as a part of their cross-border program. Pricepally is is our Lagos, Nigeria-based e-commerce start-up focusing on connecting producers in the agricultural value chain with consumers in Nigeria. The…