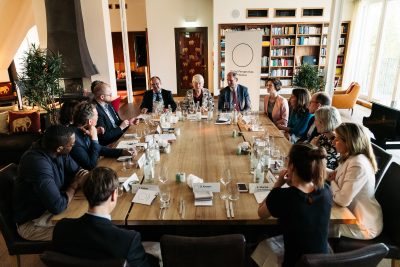 strong Earlier this month, GreenTec Capital CEO Erick Yong had the pleasure of attending a private circle dinner in Berlin hosted by the Global Perspectives Initiative. Erick joined representatives from politics, media, business, and civil society for high-level discussions addressing how to amplify the impact and engagement achieved through German soft-power.

The Global Perspectives Initiative is a not-for-profit organization founded in 2016 by Dr. Ingrid Hamm and Stephan Balzer with the goal of supporting Germany’s contributions to the UN’s Sustainable Development Goals.
The dinner featured Mark Suzman, Chief Strategy Officer and President, Global Policy & Advocacy at the Bill & Melinda Gates Foundation sharing his views on Germany’s role in global development and what he has learned by leading strategy and advocacy for one of the world’s largest and most influential private foundations.

Following Mr. Suzman’s remarks was an active and broad discussion with many stimulating and insightful contributions reflecting the varied perspectives of the dinner’s attendees. The discussion highlighted several important issues from rebuilding trust in institutions, to the responsibility of the media in steering the public discourse on global challenges.

Dr. Ingrid Hamm, Founder & CEO Global Perspectives Initiative said: “Especially from an outside perspective, Germany has achieved a lot as a global leader in the last decade and has pushed many important initiatives forward in multilateral settings. However, a lot of work remains ahead. That is why we frequently bring together decision-makers, thought leaders and innovators. In doing so, it is particularly important for us to involve young entrepreneurs – above all those who see Africa’s potential and are active on the continent, such as Mr. Yong – in these conversations to discuss innovative approaches to contribute to sustainable global development.“

Erick Yong, GreenTec Capital CEO said “As an investor into Africa, we have seen firsthand the potential and benefits of working with the German private and public sectors toward achieving development and business goals, but there are missed opportunities. In particular, the potential for German technology to help African SMEs is unfulfilled. We are inspired by approaches such as those implemented by Mr. Suzman at the Gates Foundation and are eager to build partnerships and further build on this momentum.”

GreenTec is very pleased to join representatives of the Joep Lange Institute, the Open Society Foundation, Die Zeit, Der Tagesspiegel, the BMZ, the Budestag, and SEEK Development, Graduate Institute of International and

Frankfurt (Germany), December 2020. We are happy to close out 2020 by sharing our impact report for the year 2019. The report was produced by impact consultants Steward Requeen and summarizes the quantitative socio-economic and environmental impact supported of GreenTec’s portfolio in 2019. The report describes how our investees are strongly tied to social and…

Frankfurt (Germany); November 2020. We sat down with GreenTec Capital Partner’s CIO Tomi Davies (TD) to ask him a few questions and get a better sense of what one of Africa’s most prominent and recognizable angel investors has to say about his plans for GreenTec, his investment thesis, and the future investment landscape in Africa….