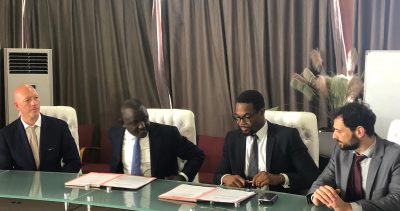 Dakar (Senegal) and Frankfurt (Germany), July 2019. GreenTec Capital Partners is very pleased to report that we have signed a Memorandum of Understanding with the Republic of Senegal represented by the General Delegation of Entrepreneurship for Women and Young People (DER). The partnership agreement was signed under the auspices of the President of Senegal, H.E. Macky Sall, and stipulates the creation of Africa’s first regional Venture Building Center, based in Dakar.

The agreement was signed by the Minister Delegate for Entrepreneurship, Papa Amadou Sarr, and GreenTec CEO and co-founder Erick Yong, joining the mutual ambitions of the two entities to the benefit of young Senegalese entrepreneurs by 1) Providing financing to the digital sector. 2) Strengthening the operational capacities of Start-ups.3) Setting up a common infrastructure to enable startups to develop sustainably.

As a part of the agreement, the government of Senegal is already constructing “The DER Innovation Hub” in Dakar, which will house major technology companies partnering with the initiative, innovators, incubators, accelerators, as well as, a GreenTec Capital subsidiary office. GreenTec will have an active local presence with GreenTec staff.

The DER, the Senegalese General Delegation for the Acceleration of Entrepreneurship for Women and Young People is an initiative of the President of the Republic of Senegal, H.E. Macky Sall. Its priority is to support and finance Senegalese entrepreneurs in the Senegalese National Development Plan’s priority sectors, which are agriculture, the digital economy, tourism, crafts, services, and several others.

The collaboration between The Republic of Senegal and GreenTec Capital Partners coincides with the ambitions of the French initiative Digital Africa led by Karim Sy. Mr. Sy has guaranteed to lend the full support of the French initiative to this new ecosystem building centre, which is based on the sharing of resources and the catalyzing of actors in the African entrepreneurship ecosystem.

Through its innovation fund, the DER has already invested in 44 Senegalese startups in 2018, with ticket sizes ranging from € 10,000 to € 100,000. In 2019, the DER aims to support more than 150 digital Startups and SMEs, by investing more than 10 million euros, while supporting an additional twenty Start-ups with the GreenTec Capital venture-building model.

GreenTec is honored to have been chosen as a Partner by DER and the Republic of Senegal and looks forward to developing our local team and activities in West Africa. The soon to be opened GreenTec branch office will provide ideal positioning for the expansion of GreenTec’s goal of expanding support for Francophone Start-up and Start-ups in West Africa.