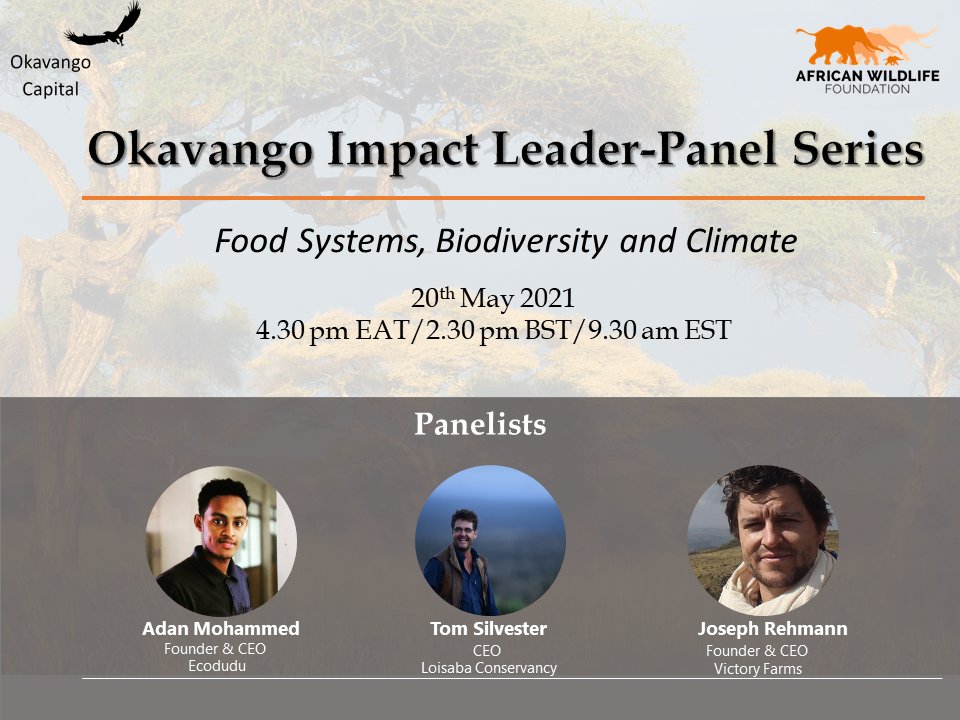 Ecodudu is our innovative Kenyan waste-to-value company that uses Black Soldier Fly larvae to convert food and organic waste into nutritious and protein-dense biomass which are then used to produce fertilizer and animal feed, and with potential for human consumption.  Okavango Capital Partners is a Conservation-Lens-Investing firm that supports companies which tackle environmental degradation in Africa’s most important ecosystems, as well as creating economic development opportunities for rural Africans.

Mr. Mohammed addressed several questions and emphasized the great market potential of insect protein.  “The market is very receptive to insect protein. In fact, African acceptance is measured at 38% compared 24% globally.”  He attributed this growing acceptance to the increasing importance of sustainability. “The trend is towards leveraging insect proteins because people are more conscious of the environmental impact of other methods of protein creation and ultimately, its consumption.”

Mr. Oriol asked the panel if their products can replace imports. Mr. Mohammed responded “COVID-19 created a barrier for many Kenyans to purchase imported protein products. We responded by investing in local production…and we are now less dependent on imports.”

Mr. Oriol pointed out that there is an 80-90% protein deficit in the typical Kenyan diet. He asked if there is the potential to use insect proteins for direct human consumption. Mr. Mohammed responded, “Black solider flies have the potential for human consumption. We are working on that.”  He emphasized that the growth of insect larvae for the production of consumable consumption is a “new and involving industry” and investment in research is the critical to further developments.

Mr. Oriol posed a final question about carbon off-sets. The panel unanimously supported the idea that alternative protein sources are positively impactful on the environment and carbon off-sets hold great financing potential.  Mr. Mohammed said, “I’m positive about carbon off-sets if we have the right partners.  I invite people to invest and finance these projects.”

Frankfurt (Germany) and Abuja (Nigeria), April 2021. GreenTec Capital is happy to report that Powerstove, was selected as a 2021 Finalist for the Finance Geneva Summit Growth Stage Impact Ventures Initiative.  The UNDP’s Growth Stage Impact Ventures (GSIV) for SDGs aims to identify and showcase mature impact ventures in emerging countries with a ‘catalytic potential’…

Frankfurt (Germany), December 2020. We are happy to close out 2020 by sharing our impact report for the year 2019. The report was produced by impact consultants Steward Requeen and summarizes the quantitative socio-economic and environmental impact supported of GreenTec’s portfolio in 2019. The report describes how our investees are strongly tied to social and…