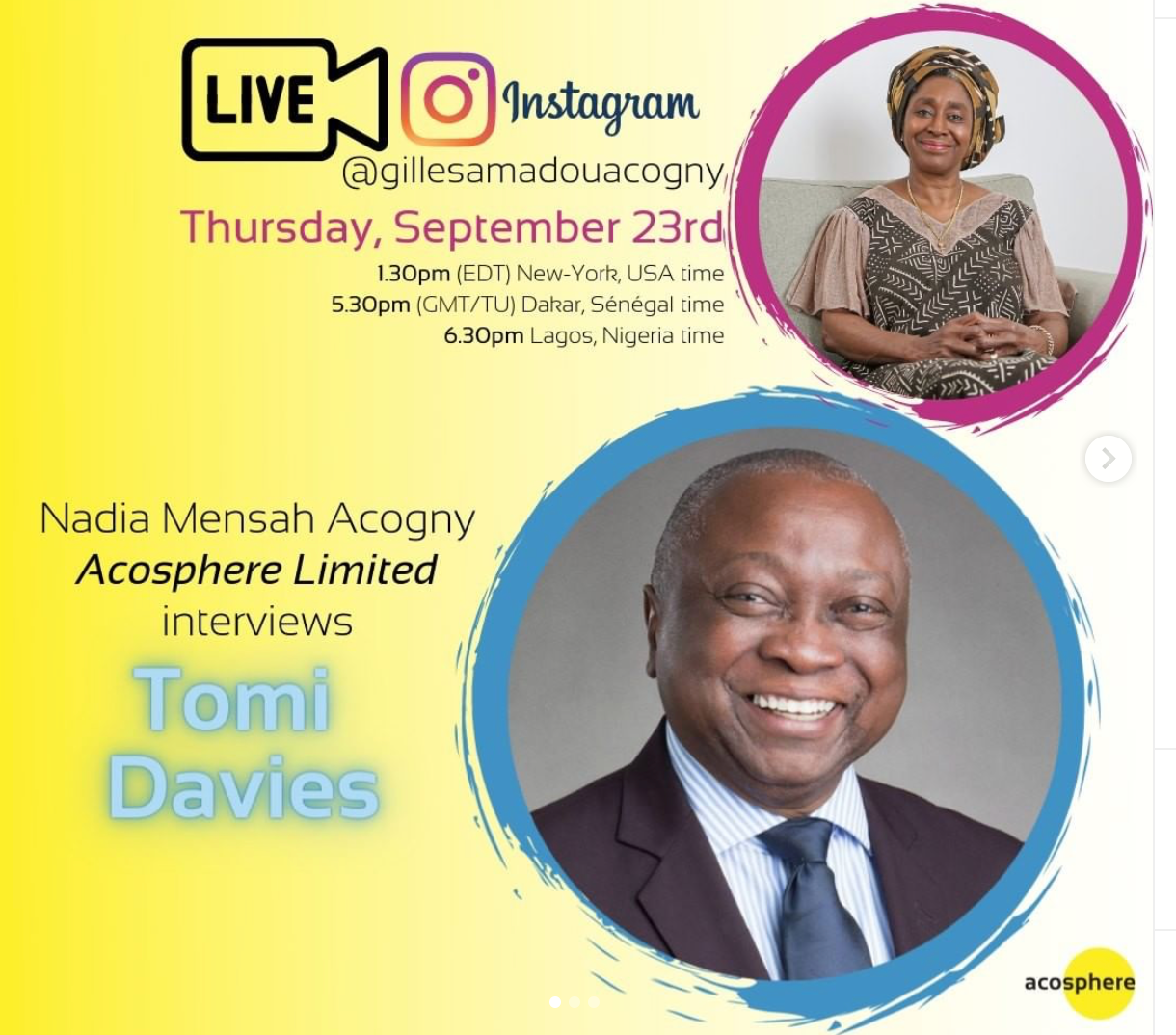 Ms. Mensah Acogny and TD are clearly friends; they chatted and shared laughs about TD’s life since being a child in Lagos.  TD opened the conversation sharing “I was always the troublesome child. My dad was a lawyer. Invariably, I ended up in front of my siblings who became the jury where one of my sisters would be the prosecutor and another the defender.  And who would be the accused?”  Both laughed knowing the answer.

While there were many discussions focused on the African start-up ecosystem, TD told several more family stories to provide light on his career, character, and beliefs.  He explained his “drive” in life this way. “I come from a very cerebral and accomplished family.  My dad had many roles. He was on the defence team for Jomo Kenyatta during the Mau Mau Uprising trials, a Queen’s Counsel, Minister of Trade during first republic of Nigeria, a French Knight and more. My late older brother founded the first indigenous advertising company in Nigeria. My younger brother is the Senior Vice Chancellor for Academic Affairs and Dean for Graduate Studies at the University of Nebraska Medical Center (UNMC). And my immediate kid-sister was the first female Deputy Managing Director of Nigerian Agip Oil Company. I really don’t want to be the lesser son of a greater father. That’s what drives me.”

TD, the creator of the POEM framework which is used to assess tech-enabled startups, cited poetry to explain what inspires and gives him direction in life.  Specifically, he recited “Desiderata,” written by the late, Max Ehrmann, an American writer. The poem is lengthy and begins with “Go placidly amid the noise and the haste,” and ends with “Strive to be happy.”  TD provided context, “My dad gave us this poem when I was 10 years-old which is when I learnt it off head. Since then, it has kept me in good stead, and centred me.”

Ms. Mensah Acogny ended the interview by asking TD for words to wrap-up an incredible interview.  He responded, “At the end of day, it’s about being a valuable human being. If other humans cannot say their lives were that much better because you lived, then of what value was your life?

Frankfurt (Germany), October 2021. GreenTec Capital is pleased to announce that Francisco Schäfer Aguilar has joined the firm in the role of Associate, after completing a 6 months internship role. Francisco will apply his background in economics, finance, and political ecology in support of the GreenTec Investment Business Unit and its initiatives to increase GCP’s…